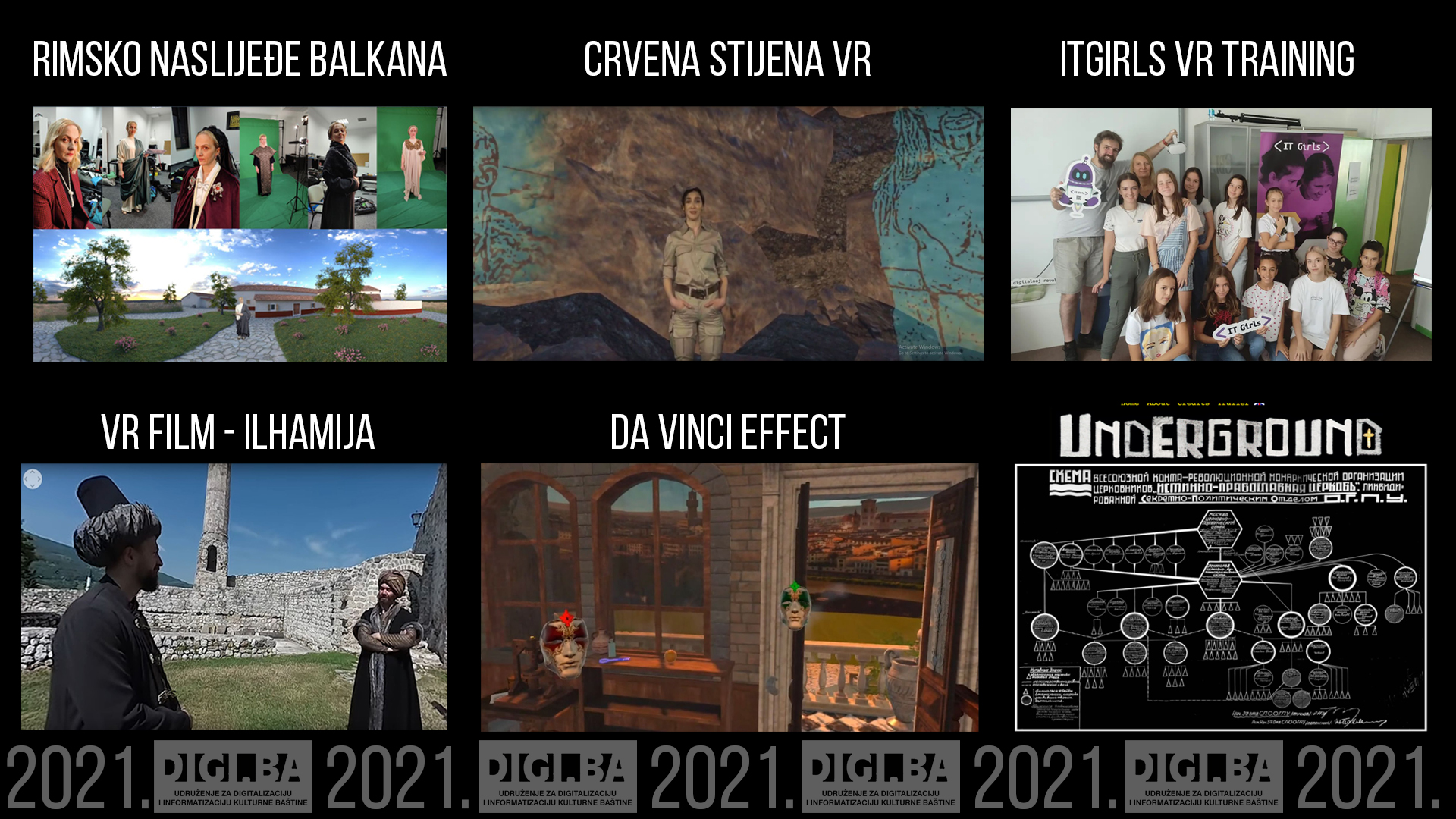 Digitised heritage from Russia to the Balkans

A regular session of the Assembly of the Association for Digitisation and Informatization of Cultural Heritage DIGI.BA was held in Sarajevo, at which the work in 2021 was summarised.

After projects in Cyprus, Malta, Italy, Albania, and in the countries of former Yugoslavia, researchers from the Sarajevo Graphics Group from the Faculty of Electrical Engineering, University of Sarajevo and DIGI.BA experts implemented the international project “Underground”, a digital version of the exhibition Orthodox believers in the Soviet Union in collaboration with historians and anthropologists from Ireland, Romania, Ukraine and Russia.

In 2021, the realisation of the project “Roman Heritage of the Balkans” continued with a digital presentation of selected archaeological sites: Doclea in Montenegro, Butrint in Albania, Lederata in Serbia and Mogorjelo in Bosnia and Herzegovina. The locations were filmed with 360 camera, their virtual reconstruction was performed and narrators were inserted. New digital stories have been added to the Virtual Reality application created in the first project realised in 2020. Promotions of the second edition of the project “Roman Heritage of the Balkans” were held on June 23, 2021. in Viminacium (Serbia), June 25, 2021. at the Risto Stijović Gallery in Podgorica (Montenegro) and June 26, 2021. in the Ministry of Culture of Albania in Tirana.

The implementation of the European project “Real Heroes” funded by Creative Europe was highlighted: “Our experts worked on creating The Da Vinci effect – multi-user VR experience. Through the Virtual Reality game about Leonardo Da Vinci, the project aims to educate young people about “real heroes” who have indebted the human race with their deeds.

A cave called Crvena stijena (Red Rock) has been known to the public since the 1950s. It is located in the village of Petrovići, Nikšić municipality, Montenegro. Red Rock contains 20 meters of archaeological layers stretching from the Middle Palaeolithic to the Bronze Age. The deposits of the Middle Palaeolithic, which are an incredible 10 meters thick, contain one of the longest and best preserved Middle Palaeolithic layers in Europe. The VR application contains digital stories about individual phases of archaeological research, digitised objects found there and their 3D reconstructions, as well as a gameplay of deer hunting in prehistoric times.

In July 2021, the digitisation of cultural heritage of Bosnia and Herzegovina continued, conducted by the Global Digital Heritage (GDH) in cooperation with the Association DIGI.BA and BH archaeologists: “During 10 days, 530 objects from the archeological collection of the National Museum of Bosnia and Herzegovina were digitised. In addition to working at the Museum, GDH and DIGI.BA also worked in the field on the digitalisation of the “Girl’s Cave” near Kladanj and the necropolis of stećak tombstones in Stupari. The DIGI.BA team also made a documentary on the digitisation of cultural heritage organised by GDH, which will be used in their campaigns around the world and promote the cultural treasures and heritage of Bosnia and Herzegovina, “said Dr. Selma Rizvić, President of DIGI.BA.

On the occasion of this year’s European Day of Remembrance for the Victims of Totalitarian Regimes, and the 200th anniversary of the death of Abdulwehab Ilhamija (Žepče, 1773 – Travnik, 1821), DIGI.BA promoted a VR film entitled “Ilhamija – the first Bosnian dissident” . The film brings the fates of Ilhamija and Rešad Kadić into a transhistorical context, the former, a historical figure and literary figure, and the latter, a dissident sufferer and writer who described the experience of persecution in Ilhamija’s Road to Death (1976).

On several occasions, the team of the DIGI.BA Association, in cooperation with UNDP, held trainings for teenage girls in VR technologies within the “ITGirls” project. At the Innovation Center Banja Luka, two groups of girls aged 12-15 learned how to shoot and edit 360 videos, make 3D models in Blender and create VR applications in Unity 3D. After that, each team made a VR visualisation of how they imagine Banja Luka as a smart city. The training was also held in Mostar and Sarajevo.

For the next year, the implementation of several projects is planned, among which the Erasmus + project with SSST stands out – creating a curriculum for masters studies in the production of 360 videos, then finalising the second part of the project “Underground”, and the project with the Municipality of Kreševo.